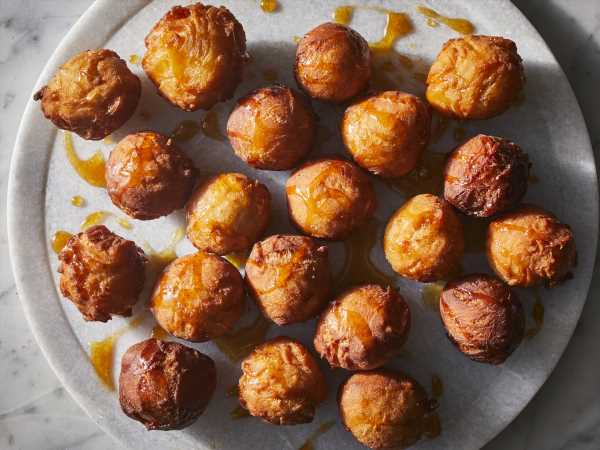 I grew up eating potato latkes on Hanukkah and was later introduced (quite happily) to sufganiyot—the jelly-filled Hanukkah doughnuts brought to Israel by Polish-Jewish immigrants. Sufganiyot have become something of an obsession there, spilling out of bakery display windows in the weeks around the holidays.

But there is another, lesser-known Hanukkah treat called bimuelos, which I think deserve equal adulation. Bimuelos stem from Sephardi cuisine, meaning the Jewish foods that originated in Spain and Portugal. The word (also sometimes spelled bunuelos) is a catchall term for a variety of fried goodies. But for Sephardi Jews, they typically refer to these sweet and rustic little fritters that are akin in size to doughnut holes.

On Hanukkah, people traditionally eat fried foods to honor the holiday’s miracle of lights. As the story goes, when a small Judean army called the Maccabees recaptured the Holy Temple in Jerusalem from the ancient Greeks, they found the space in disarray with only enough olive oil to light the Temple’s great menorah for one night. Miraculously, however, the oil lasted for eight nights. Eight nights of light then equals eight nights of fried deliciousness today.

Like latkes and sufganiyot, bimuelos are fried. The nuggets of yeasted dough puff up in the oil and emerge light and airy with a hint of crackle as you bite into them. They are traditionally served either sprinkled with cinnamon-sugar or drizzled with a simple sugar syrup, which is the hallmark of so many Sephardi and Middle Eastern desserts. In this version I add a little cinnamon to the dough itself and use apple cider as the base of the syrup. As the cider reduces on the stove it grows fragrant and syrupy, and then, to gild the lily, I splash a bit of rose water into the syrup. The floral notes are subtle but powerful, transforming the Hanukkah doughnut from ordinary to extraordinary.

If you deep fry foods with any regularity (really even once or twice a year), go ahead and invest in a deep-fry thermometer. Most cost under $20 and ensure that the oil is just the right temperature to sizzle without scorching.
Simple syrup absorbs best into baked goods when one part of the equation is cool and the other is hot. Since the bimuelos should be eaten as soon as possible after frying, make sure the syrup has had time to cool or chill before starting to fry.

How to Make It

Combine apple cider and brown sugar in a small saucepan. Bring to a boil over medium-high, stirring often, until sugar is dissolved. Reduce heat to medium, and cook, stirring often, until liquid reduces by about half, about 10 minutes. Remove from heat, and stir in rose water. Let cool completely. (Syrup will continue to thicken as it cools.)

Combine yeast, 1 teaspoon granulated sugar, and 3/4 cup warm water in bowl of a stand mixer fitted with the paddle attachment, and let stand until bubbling and frothy, about 5 minutes.

Cover bowl with plastic wrap or a clean kitchen towel, and let stand in a warm place until doubled in size, about 1 hour and 30 minutes.

Line a large plate with paper towels. Pour oil into a medium saucepan to a depth of 1 1/2 inches. Heat over medium until a deep-fry thermometer reads 350°F. Working in batches of 5 or 6, pinch off walnut-size pieces of dough. Using flour-coated hands, roll each into a rough ball, and drop into hot oil. Fry until golden and cooked through, 2 to 4 minutes per batch, flipping halfway through. Using a slotted spoon, transfer to prepared plate to drain briefly.

Drizzle a generous amount of cooled syrup over hot bimuelos, and serve immediately.