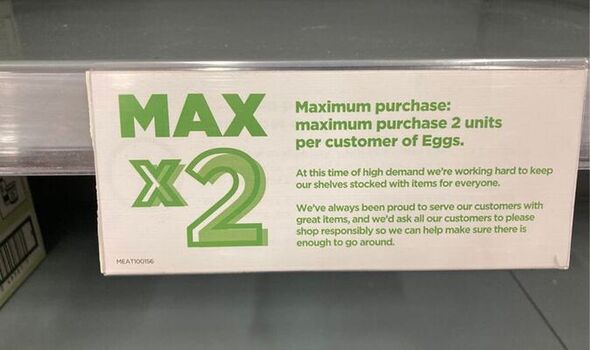 Farmers have warned that the UK could run out of eggs by Christmas as a result of rising costs of production and the severity of an avian flu outbreak. As it is, customers have been faced with empty shelves in the egg section of their local supermarket in recent days.

Some stores are already starting to ration eggs, while others are waiting for more stock to come in.

As a result, Stoke-on-Trent Live’s Rachel Alexander went to see what the situation was like, near her. Here is what she found:

“While I enjoy a chocolate egg hunt, the added stress of looking for half a dozen as Christmas approaches was not what I needed. It’s been nearly 70 years since eggs were last rationed in the UK, so it was with some trepidation that I set off on my mission.

“I didn’t get off to the best of starts as Lidl Longton’s shelves were almost completely barren. Despite rationing their customers to three units each, there were barely any cartons left.

“My egg hunt continued to Aldi in Fenton where the situation wasn’t much better. Bare shelves again indicated something was not quite right – but here no rations were in place.

“Continuing on my way to at Asda in Fenton, shoppers were limited to a maximum of two units of eggs.

“However, I struck gold at Tesco in Longton where there appeared to be a plentiful supply. It did have a sign to say the free range eggs were currently barn eggs after a housing order was introduced earlier this month.

“Like Tesco, Morrisons had plenty of eggs available and no rationing was in place. I wouldn’t have noticed there was a supply problem if I wasn’t already in the know.

“For now at least, eggs are available but give it a few weeks it might be easier to get an Easter egg than one from a hen.”

Addressing the egg shortage, the British Free Range Egg Producers Association said: “Feeding hens is now at least 50% more expensive than it was, and energy prices have soared in the same way that consumers have seen their domestic bills rise.

“Spending on fuel has grown by 30%, while labour and packaging also costs more.”

As a result, as Andrew Opie, Director of Food & Sustainability at the British Retail Consortium, explains: “While avian flu has disrupted the supply of some egg ranges, retailers are experts at managing supply chains and are working hard to minimise impact on customers. Some stores have introduced temporary limits on the number of boxes customers can buy to ensure availability for everyone.”

Not only are farmers battling the rising costs in production, they are also faced with the largest outbreak of avian influenza in the UK. A national housing order was introduced across England on November 7 to protect poultry from the disease.

Christine Middlemiss, the UK’s Chief Veterinary Officer, said: “We are now facing this year, the largest ever outbreak of bird flu and are seeing a rapid escalation in the number of cases on commercial farms and in backyard birds across England.

“The risk of kept birds being exposed to disease has reached a point where it is now necessary for all birds to be housed until further notice.”

Commenting on the limit of eggs customers are permitted to buy in store, a spokesperson for Asda told Express.co.uk: “We are working hard with our suppliers to resolve the industry challenges which are currently affecting all supermarkets and to make sure as many customers as possible can buy eggs we have introduced a temporary limit of two boxes per customer.”