Ham can be bought from any local butcher and is the perfect centrepiece for a family meal. James opted for boiled potatoes and chopped barley to go with his ham, but the chef also recommended adding a fried egg to complete the dish.

James Martin appears on his ITV Saturday morning show every week to share his recipes and cooking tips and tricks with viewers.

James advised buying ham from your local butcher shop and following the butcher’s recommendations on how to prepare it for cooking.

James’ first step was to soak the ham in cold water before putting it in a large saucepan. 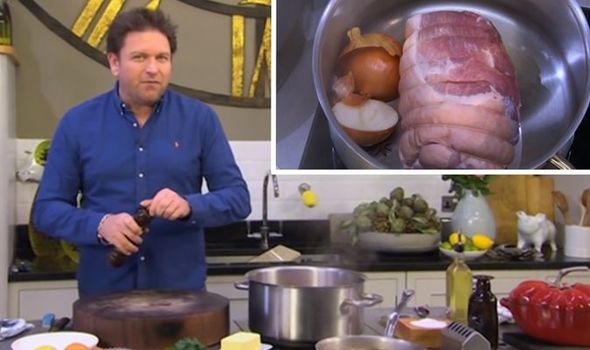 He then added the ingredients that the ham will be cooked with: cinnamon sticks, whole star anises, an onion, an apple, a lemon, an orange, parsley, black pepper corns, bay leaves, and thyme.

“The onion can go straight in – skins, the lot,” James advised.

The chef also chopped the lemon and orange in half and put them in with their skin still on, whereas he chopped the apple into slices.

James did not have bay leaves but he said that the ingredient’s addition to the dish would be “really really nice”.

Next, James covered the ham and other ingredients in cold water before putting the pan on the hob to bring it to the boil.

The chef recommended simmering the ham for around an hour and a half and then leaving it to rest.

Once it has reached room temperature, James advised taking it out of the pan and, after taking the string around it off, cut across the meat diagonally using a sharp knife.

James then took a few cloves and placed them in the crisscrosses that he had just made with the knife. 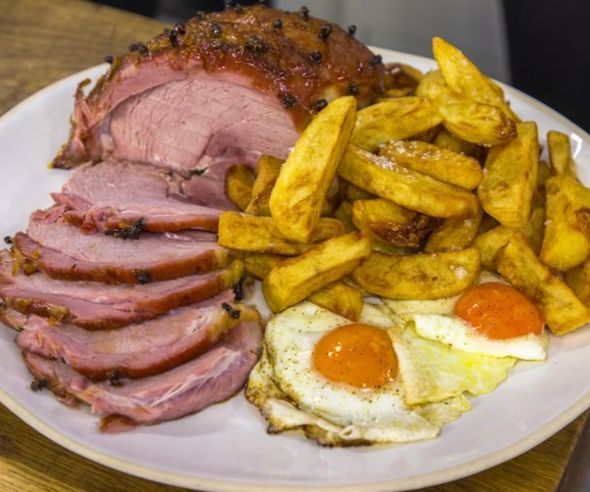 Then, James placed the ham in an oven tray and sliced an orange and lemon before adding them into the tray too.

He also put in some star anises and cinnamon sticks again, for added flavour.

After adding a touch of water to the ham, which James said ensures that it doesn’t burn, he took a jar of marmalade and used a spoon to cover the top of the meat in the jam.

James set the oven to 200 degrees and placed the tray inside.

James recommended cooking the ham and the accompanying ingredients for 30 to 40 minutes.

The chef showed viewers a piece of ham he had already cooked, with the marmalade glazed perfectly on top.

Lastly, James added buttered boiled potatoes to the ham and recommended adding some chopped parsley to the dish too.

Cooked ham can be eaten with a variety of other foods, including eggs, chips, pasta, or even on a sandwich.