As the weather’s getting warmer, more people are waving goodbye to the gym treadmills and heading outside to get in their daily dose of cardio. But as more people take up jogging or running, there are a few injuries they need to be aware of.

Injuries can occur while carrying out any activity, and doctors at New Victoria Hospital have highlighted some of the most common niggles runners can come across while trying to stay active, while offering some tips on how to diagnose pain and how to deal with it.

Orthopaedic doctor Pal Ramesh, revealed plantar fasciitis is one of the “most common causes of heel pain” among runners.

It is caused by inflammation of a thick band of tissue that runs across the bottom of each foot and connects the heel bone to the toes.

“It usually leads to a sharp, stabbing pain within your first steps in the morning or after a long period of resting,” Dr Ramesh adds.

“The pain normally decreases after a few minutes, but it might return after long periods of standing or moving around.”

According to Dr Ramesh, plantar fasciitis occurs if a person has “tight calves and Achilles tendon stiffness”, which may act as a precursor of an altered walking pattern. 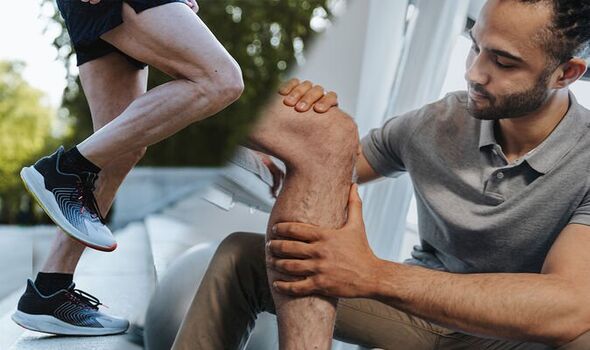 “Sometimes this can be precipitated by sudden excessive activity, poor-fitting shoes, walking over uneven grounds and cobbled streets,” he explained.

“Jobs that require standing up for longer periods and high-impact sports activities could lead to plantar fasciitis too, while inflammatory conditions like rheumatism could also be a risk factor.”

Dr Ramesh also said: “Steroid injection and shock wave therapy can be beneficial too, if the pain doesn’t settle down.”

The Iliotibial band is a layer of thick tissue on the outside of the thigh, surrounding and protecting important muscles.

This runs from the pelvis to the tibia shin bone, and continually crosses in front of and behind the knee whilst exercising.

Specialist knee surgeon Khalid Al-Dadah, revealed that this condition occurs in “up to 15 percent of overuse injuries to the knee”.

“One of the most common causes of ITB Syndrome is repetitive running over long distances,” Dr Al-Dadah explained, while adding symptoms are usually worsened by poor shoe support, sudden change in training intensity and altered terrain can all exacerbate symptoms.

As some runners have an increased landing force on one leg compared to the other, he advised that a “proper running technique” must be undertaken in order to minimise symptom development.

Dr Al-Dadah recommends ice packs and the administration of topical anti-inflammatory gels over the affected painful area to ease pain.

He noted that ultrasound-guided steroid injections can be utilised where severe inflammation does not settle.

The use of shockwave therapy, deep friction massages, proprioception conditioning can also help.

“The vital component to a successful recovery is targeted physiotherapy, as an imbalance of the muscles, along with tightness, can worsen symptoms,” he said, while pointing out more than 90 percent of patients see a vast improvement with the above mentioned non-operative measures.

Dr Al-Dadah revealed that patellofemoral pain syndrome, or runner’s knee as it’s more widely known, is most common in long-distance runners and athletes who carry out repetitive impact activities.

Pain can be brought on by endurance running as the impact to the patella on the femur and one of the main causes is poor running technique, as well as muscle imbalance and weakness.

Sitting for long periods of time also increases the pressure going through the knee cap and it too may exacerbate the symptoms further.

“The patellofemoral joint takes the most pressure out of any joint in the body – this is due to the position of the centre of rotation around the knee, the deceleration force when taking a step and the power of muscle contractions combined,” Dr Al-Dadah explained.

To avoid this common injury, he advised people to not to suddenly increase their running distances or change the terrain on which they run.

In terms of treatment he added: “If you’re marathon training, I advise taking up static bike exercises instead, as being in a seated position does not put as much pressure on the kneecap, and pedalling helps tone the quadriceps and calf muscles in a controlled manner.

“Custom made insoles can be created to correct existing flatfoot deformities which may add pressure to your knees. Otherwise, arch-supporting insoles bought over-the-counter may significantly help with symptoms and alignment.”

But realistically he revealed there is “no reliable, targeted surgical cure for runner’s knee”.

“It is mostly a mechanical pathology,” he said.

“Anti-inflammatory medications and ice packs will help relieve acute exacerbations, and a thorough warm-up and stretching before any activity is recommended.

“If symptoms persist, then a steroid injection into the knee can be implemented for symptomatic relief, allowing more exercises to be carried out with the physiotherapy team.”

Targeted and focused physiotherapy is “key to training and balancing the stabilising muscles” around the knee cap.